My year of panicking, wandering, and “pickin’ it up” 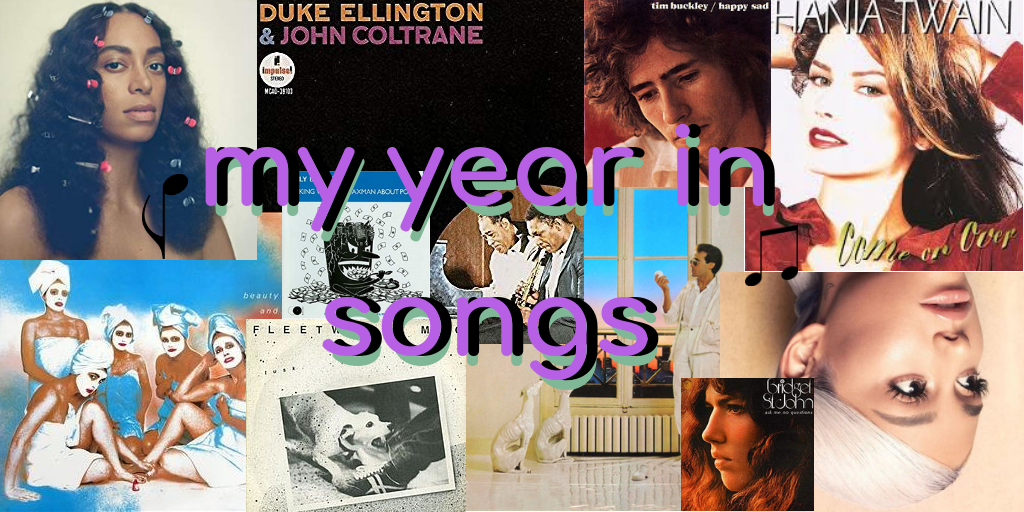 Folks (or one person reading this),

One of my favorite end-of-year rituals is to reminisce on all the music that accompanied me along these twelve months of being alive. Since the age of 14, I have tracked most of my virtual listening on Last.fm. First through my hefty iPod classic (R.I.P.) and in later years through the wonder that is Spotify, which also crafts end-of-year retrospective playlists for its multitude of users.

And it all really puts things into perspective. Like, wow, I was listening to very morose stuff back in March and oh, I listened to far too many 80’s love songs to stay positive and feel peppy. Having a look at all these lists and charts online, there are a few key songs that truly defined my life throughout this unpredictable year. Here is a list of them.

This 2018, I greeted the new year by working four consecutive eight-hour shifts at my old job as a cashier at a supermarket. On the fourth day, New Year’s Day, I was sent home early. My sleep deprivation had heightened my usual anxiety and the bright white lights had me deliriously tapping my collarbone with my index finger, repeatedly counting in my head 1, 2, 3, hoping it would be of some relief (it wasn’t.)

Frustrated, I later decided to get the damn panic attack out of my system at a supply closet, but the panic laughed right at my face, saying “that’s cheating! You’ve gotta leave this room to let me out. This place is too quiet. I like the endless faces and James Blunt song playing from the roof.” And so, I followed its orders and the panic let itself go, erupting in front of an audience of customers and coworkers.

“Buzzin’ Fly” is one of the songs I would often listen to on my way to work when I worked early shifts, my anxiety being at its worst in the morning. There is something calmingly diurnal about its soft bells and flowing rhythm, which during this chapter in my life was a steady reminder that my exhaustion would melt away by the end of each working day.

For my 22nd birthday, my siblings and I dined on some giant celebratory burgers and later watched Call Me By Your Name. After seeing the trailer, which was loaded with beautiful shots of the Italian countryside and a baby-faced Timothée Chalamet with a sweet little song by Sufjan Stevens playing in the background, I was sold. The film, set in the late 80’s, is a gay love story between its two protagonists.

To be frank, the actual love story didn’t do much for me (Armie Hammer has serial-killer eyes) but it’s soundtrack blew me away. I often fantasize of a life as a music supervisor for films like this one, fixated with the ’80s. Call Me By Your Name’s soundtrack perfectly captures its sensual Mediterranean setting with loads of summery italo-disco and heartfelt songs like this one, which is perhaps the best-fitting in the context of the film. Chalamet’s character Elio lives through its lyrics, which tell the story of a gifted “music-man” who is clueless at expressing his affection for the one he loves. And the song is so effective in its earnestness that it moves me every single time I listen to it, leaving me soft and mushy.

From the very first listen, “Greetings to the New Brunette” filled me with memories I never had. Ones of little girls with lush long hair enjoying ice cream cones by the harbor while seagulls fly freely on a breezy English afternoon.

In this song, British folk legend Billy Bragg sings of a loving relationship as it faces several ups and downs and life-changing decisions. Bragg’s stream of consciousness singing and special guest Johnny Marr’s divine plucking guitarwork make every second of the tune worth savoring. One scene leads to another and it’s like you’re living through these charming characters; the neurotic protagonist, his love “Shirley,” and her parents who disapprove of their union. The song ends with Bragg sending greetings to the “new brunette,” their newborn son, tying it with a sweet and sentimental bow.

Graduating from college is an inevitable turning point in one’s life. You might think you’ll get your well-earned piece of paper and nothing else about your life will change. But just around the same time I was preparing to say goodbye to my life as an undergrad (and manically applying to grad school), life had a bigger lesson for me to learn.

“Storms” is a song about grief. This Stevie Nicks track from the band’s chaotic masterpiece Tusk shows off her husky voice and poetic words. Here, she sings about feeling misguided and blue, wanting to say goodbye to something but knowing how much emptier it will leave her feeling.

This year, I grieved the end of my childhood and of many friendships I made in college. I found myself leaving so much behind without even realizing it and it weighed down on me all year.

I learned that no two relationships are alike, each one laid out in your life to teach you a lesson, whether lifelong or a more shortlived one, and that is fine. 2018 was a year of loss that allowed me to shed those old leaves and rebuild myself, leaving me fully in charge of my life. Scarier things have happened.

This summer I revived my Rob Sheffield obsession by reading his sophomore book, Talking to Girls About Duran Duran, which devotes its first chapter to the Go-Go’s signature song, “Our Lips Are Sealed.”

In the chapter, Rob shares stories of how he and his sisters were obsessed with the Go-Go’s. Rob specifically really wanted to either be in the band with them or date one of them. I read it and laughed while listening to the band’s amazing first album to bring the words to life.

That same summer I took a trip to Gainesville to visit a friend for a couple of days. One night, me and my friend had planned to go dancing, but she wasn’t feeling well and went to bed early. While she slept, I went through her records and found this same Go-Go’s album.

I stayed up all night listening to it through headphones with a smile on my face, not needing to go out and dance when in my hands was a perfect pop record to keep me company in this small charming town full of trees and wonders.

This year gave us the victorious anthem that is “No Tears Left to Cry,” Ariana Grande’s manifesto on embracing positivity and growing from our pain. It mourns the past while remaining full of gratitude for the present, our ultimate blessing.

It was a message that many beyond me needed to hear this year. But what makes this song all the more authentic is that you know Grande is singing to herself and healing her own pain and not to a blank canvas of faces in a crowd. I felt her light inspire hope within me and my closest friendships who were also dealing with lots of anxiety and pain. Somehow, it told us all “it’s okay, we’re in it together and we’re growing so much” in a way that transcended words.

This year, I finally got my driving license (yay!) and later on my first car (louder yay!) and it was one of my proudest moments. My car is perfect for me, small, fuel-efficient and even cute! Being from 2011, it also has a CD player, which meant I had to go shopping for some CD’s to keep me company during my travels.

Her iconic country-pop crossover album Come on Over was the first CD I bought. I played it obsessively those first months that I was driving all over Miami. Her charm and enthusiasm let me know I was going to be okay on the road and were a great way to fully get into Shania beyond her chart-toppers.

My personal favorite? This galloping pop rock number on the power of love, Shania’s favorite topic. Her complete faith in love is infectious. I put all of my faith and love to my new life driving my tiny car on the streets of Miami.

“Did you know Solange was in Miami when she wrote ‘Cranes in the Sky?’” my friend Sasja asked me one night.

We were driving in circles for about an hour trying to meet up with another pair of friends all while still getting to know each other in her car. We’d met earlier in the year during my final semester and later reconnected through a mutual friend of ours. I immediately knew I wanted to become great friends with her.

To answer her question, I did not know about Solange’s time in Miami. Sasja explained that the cranes she refers to in the song are those you see dangling all over Miami due to its never-ending wave of construction.

Solange was living here at the time when writing songs for her masterpiece, A Seat at the Table. The album is beautifully-produced and raw and poetic in its lyrics, which celebrate black culture. When it was released back in 2016, I listened to some of it peripherally but got distracted with other stuff I was into to at the time.

It seems like me and A Seat at the Table were meant to get to know each other later on in my life, when it could most serve me. So for that I say: Thank you, Sasja.

Enough with the sadness. The most special event of my life this year was beginning to write full-time at my first job out of college. With that came a lot freedom and excitement. One of the first things I did with my earnings was buy a ticket to Oslo to visit my best friend for Thanksgiving, and it was a dream come true.

We strolled the chilly streets of Oslo in the dark winter night sky, shopped a bunch, listened to lots of jazz after chatting about my newfound love for the genre (it has become my favorite thing to listen to when I am writing at work) and watched terrible reality TV.

“Big Nick” has a festive quality to it that warms my heart and instantly paints a picture in my mind of us dipping gingerbread cookies into warm spiced wine (a surprisingly delicious combo, by the way) like it was decades ago, even though it has only been a month.

Like most, when overwhelmed, I need to get out of my head and out of my house. Before I had a car, I would go out for a short walk around my neighborhood or ride my bike up to my favorite park by the bay and just meditate for a while or stare at the sea.

Once I had my own car though, I immediately understood what Peter Gabriel was talking about when he sang about driving off aimlessly whenever he feels the urge to “run away.” And so began my new form of therapy, driving out in time to see the sunset’s cotton candy clouds, brushed with beams of pink and orange.

One particular day, I had this Bridget St. John song pop out on shuffle and it fit into the scene in front of me perfectly. Halfway through its seven minutes, sounds of birds and church bells began to flutter alongside the delicate harmonies circling the chorus and the fingerpicking guitars strolling through the song. It feels like the perfect ending to a tumultuous day (and year), even if the turmoil is only happening in your head.